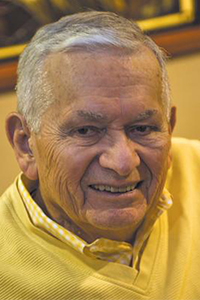 We are saddened to share the news that L. Thomas Wilburn, 87, the long-time CEO of Bethesda and first CEO of TriHealth, passed away on Sunday, December 27, 2015. His family, including his wife of 64 years, Sandra, was at his side.

On behalf of everyone at Bethesda, we extend our condolences and prayers to the Wilburns.

“Tom Wilburn’s tenure as CEO is a capstone of Bethesda’s 115-year legacy,” said James Pearce, chairman of Bethesda Inc. “He was a healthcare visionary who changed so many lives for the better. He led by example and was a valued mentor and friend to many members of the Bethesda family and greater Cincinnati residents.”

Few people have given of themselves in a way that touched community, civic and industry life as has Tom Wilburn.

Tom was born in Pennsylvania, the son of a coal miner. He understood the value of hard work and dedication. He began his career with Bethesda in 1971 and served as President and CEO of Bethesda Hospital, Inc. for more than 20 years. It was his idea to merge the operations of both Bethesda Oak and Bethesda North hospitals and Catholic Health Initiative’s Good Samaritan Hospital to form TriHealth, for which he served as CEO until he retired in 1998. He then served as executive director of Bethesda Inc. until 2008.

Today, TriHealth employs nearly 12,000 caregivers and delivers services through hospitals, ambulatory care centers and other facilities at 130 locations throughout the region.

There are many “firsts” that can be attributed to Tom’s ability to envision our community’s needs years into the future.

His career was a relentless quest to improve the region’s healthcare and enhance collaboration, well before collaboration came into vogue. He played a key role in founding in 1992 and then chairing through 2006 the Health Collaborative of Greater Cincinnati, one of the nation’s first health collaboratives and a national model to this day. In 1993, he became the first healthcare executive to lead the Cincinnati USA Regional Chamber.

Tom personally drove positive change far beyond the region. His vision in creating one of America’s first Hospice programs shaped Hospice of Cincinnati, founded in 1977, as a national beacon for innovative programs enhancing end-of-life experiences for patients and their families. Tom’s unrelenting efforts also helped to pass landmark legislation that extended federal insurance coverage to include hospice care. Since then, nearly two generations of elderly and underprivileged have been able to depend upon hospice care made possible by Medicaid and Medicare coverage.

Among many accolades, in 2014, he was recognized with the Healthcare Heroes Lifetime Achievement Award presented by the Cincinnati Business Courier and in 2015 was named by the Cincinnati USA Regional Chamber of Commerce as a Great Living Cincinnatian, one of the highest honors accorded an individual in the region.

We will miss Tom Wilburn. We are thankful to have been in his care and will benefit always from his example and his good work.

Note: The Wilburn family has asked that anyone wishing to make a memorial in Tom’s name may do so with the Bethesda Foundation or Hospice of Cincinnati.