Bethesda Inc. announces Kathy Kelly as Board of Trustees Chair; Names Three Community Leaders to Board 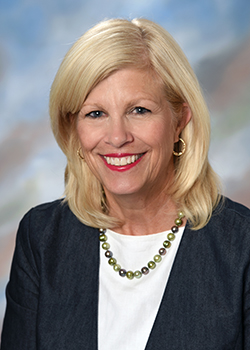 Dr. Collins and Quint Studer were also named to the TriHealth Board of Trustees.

Since 2010, Bethesda Inc. has invested more than $33 million in innovative ideas to transform health and health care, ranking it as one of Ohio’s largest health-focused funders, according to statistics from Grantmakers in Health, a national organization supporting philanthropic health funders.

Kathy Kelly is the former president of Kroger Personal Finance for The Kroger Co., where she led  its financial products and services offerings before her retirement. During her career with Kroger, she  served as assistant treasurer and director of investor relations for the retailer.

Kathy holds a Masters of Business Administration with a finance concentration from Xavier University and a Bachelor of Science degree in finance and economics from Miami University. She also serves on the board of trustees for Easter Seals Tristate, YWCA of Greater Cincinnati and the SC Ministry Foundation.  She has been a Bethesda board member since 2012.

Dr. Collins most recently served as the Senior Vice President of Quality and Chief Medical Officer for TriHealth before retiring in 2017 after 34 years as a clinician and medical administrator. He oversaw Clinical Quality at Bethesda North Hospital, Good Samaritan Hospital, Hospice of Cincinnati, TriHealth Evendale Hospital and Bethesda Butler Hospital, and two freestanding TriHealth emergency rooms.

Dr. Collins is a graduate of the University of Cincinnati, College of Medicine.  He completed his General Surgery Residency, Fellowship in Vascular Surgery and Renal Transplantation at Columbia-Presbyterian Medical Center, New York, NY. He practiced General and Vascular Surgery from 1983-2006 with Queen City General and Vascular Surgeons Group in Cincinnati.  In 2017, Dr. Collins was named winner of the Business Courier’s Health Care Hero Lifetime Achievement Award and was recognized by the Health Collaborative with the Richard M. Smith MD Leadership in Quality Improvement Award.

Quint has over 30 years’ experience helping health systems across the country develop healthcare leaders, improve operations and optimize the delivery of patient care. He has been recognized multiple times by Modern Health Care magazine as one of the 100 most influential health care leaders in the country.

Clark has served as the Chief Human Resources Officer of two multi-billion dollar, publicly traded, global companies.  He worked with hundreds of senior leaders and emerging leaders globally to improve leadership, performance, and to facilitate culture change in such industries as consumer goods, pulp and paper production, pharmaceuticals and biotech, aerospace, BPO/HRO, and higher education.

Bethesda Inc. is co-sponsor of TriHealth and creator of bi3, a dedicated grantmaking initiative to transform health in Greater Cincinnati.   Bethesda Inc. is a non-profit support organization for Bethesda Hospitals and entities, including Bethesda Foundation, which provides philanthropic support for Bethesda hospitals, Hospice of Cincinnati and Fernside. Visit us at bethesda-inc.org or bi3.org.